Women today spend half their lives in menopause. Menopause is a natural transition but the loss of ovarian function can lead to abrupt changes. In particular, menopausal women note cognitive dysfunction often describing difficulties with memory and focus. Menopausal symptoms like hot flashes and night sweats may dramatically impact sleep. Women may experience bone loss, vaginal dryness, and a higher risk of cardiovascular disease.

What Happens with Menopause

Women going through menopause may feel that they have accelerated aging. Skin tone slackens, intercourse may be painful, and libido may become non-existent. Hormone replacement therapy (HRT) can reduce these symptoms, but concerns about risks are significant. Estrogen stimulates cell growth, so there is concern that HRT containing estrogen may allow tumors to develop in estrogen sensitive organs (breast and uterus). There remains a great debate as to whether the benefits of estrogens outweigh the risks. 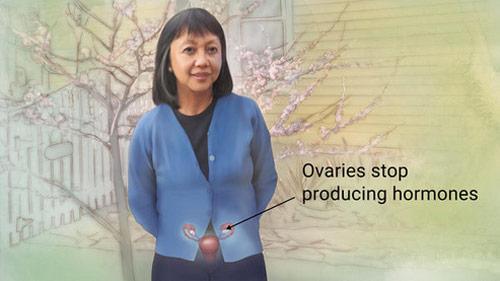 Estrogen improves many health consequences of aging including osteoporosis, and bladder and vaginal tissue degeneration. Estrogen also acts on the cardiovascular system and the nervous system, although there is still controversy over risks and benefits for these effects. Ideally, we wish to limit aging without increasing the risk of cancer.

The initial results of the Women’s Health Initiative (WHI), which were released in 2002, indicated a greater risk to postmenopausal hormone replacement therapy (HRT) than previously thought. Many experts now believe the study was over generalized and alarmist, overemphasizing the risk of HRT while minimizing the benefits. In the interim, additional studies (including HERS I, HERS II, and ESTHER) have clarified many of the WHI findings, bringing those findings into proper perspective.

HRT can be given orally or trans-dermally. There are advantages and disadvantages to each method of administration.

The liver detoxifies all substances that are absorbed through the intestinal tract. Everything that is ingested travels to the liver first, called the “first pass effect”. The liver inactivates many drugs, and this means that oral preparations have to be far more potent to achieve the same effect as medicines that are applied to the skin. Transdermal preparations bypass the liver and go directly into the blood stream. They therefore do not affect liver function and require far lower doses. Transdermal preparations provide more stable blood levels of hormone. Transdermal estradiol was shown to decrease circulating cortisol, insulin, triglycerides, and low-density cholesterol to normal values, which lowers risk of blood clots and has a beneficial metabolic effect in menopausal women. (Basurto, et al) They also appear to lower blood pressure. They don’t suppress natural testosterone levels as much as oral medications, which means improved orgasm and libido.

Oral estrogens are particularly useful for women who have localized reactions to patch adhesives or other objections to the transdermal approach. There are more oral products that combine estrogen and progesterone into a single delivery product. For women with contraindications to estrogen (history of breast cancer), low dose vaginal estrogen reverses vaginal dryness and bladder irritation with minimal absorption. Intravaginal DHEAS (which is turned into testosterone and estrogen) has recently been shown to improve vaginal dryness and painful intercourse without significant increase in blood levels of estrogen or testosterone.

HRT should be tailored to the individual. In light of the Women’s Health Initiative, there is pressure to minimize hormone doses and limit time a woman should use medication. We provide women with the smallest dose needed to get good symptom control, and known benefits of HRT. The decision of how long to take HRT is individualized for each patient.

In the past few years, there’s been growing interest in “bioidentical” hormones, which are promoted as safer and more effective than FDA-approved hormones. There are estrogen products available through prescription that are “bio-identical” to a woman’s natural estrogen: estradiol 17-ß. The FDA tests products for purity, potency, efficacy and safety. Many claims made about the benefits of compounded “bio-identical”s are unproven since these drugs are not subject to FDA regulation. Because there is no regulatory oversight of these products, quality and consistency in dosing may be off. In 2001, the FDA randomly tested 37 products from 12 compounding pharmacies and found that nine (24%) were less potent than indicated. In contrast, only 2% of FDA-approved products failed the potency test when randomly sampled. There is very little information about side effects and patients do not have risk or safety information available. Insurance usually does not cover these unregulated compounded preparations. (Harvard Health Watch)

The term bio-identical means “chemically indistinguishable from the hormones produced in a woman’s body, namely estradiol 17-ß and progesterone. There are numerous FDA approved drugs that contain these hormones. These drugs are derived from plant sources and can be called “bio-identical”. (Files et al). Some FDA approved and regulated Bioidentical formulations are listed below.

Bioidentical Progesterone (Prometrium) is FDA approved, and may be used vaginally or orally. It often causes sleepiness, so is taken at bedtime. Crinone is a vaginal Bioidentical Progesterone cream, but it generally used during fertility treatment or in early pregnancy. Estrone and estriol are often combined with estradiol by compounding formulas, but there is no indication that this mixture is any safer or more effective than FDA approved estrogens. Estriol is the estrogen most common in pregnant women. There are claims that Estriol reduces risk of breast cancer in women. In laboratory studies, estriol has been shown to prevent and even reverse breast tumors in rats — but there’s no evidence that it does so in women.

After menopause, the ovaries produce testosterone at much lower levels then before menopause. Women who have had their ovaries removed lose about 50% of their testosterone production, with the remainder being produced by the adrenal glands. Testosterone is important for normal libido. When estrogen declines after menopause, the pituitary gland will still stimulate testosterone production by the ovary. If a postmenopausal woman takes estrogen replacement, the pituitary signal is reduced, which may lower natural testosterone production, and may lead to a decline in libido. Unfortunately, only limited studies of treatment of low sex drive (libido) and lack of orgasm have been done in women. Testosterone replacement for women has not been approved by the FDA. There is a single drug (Addyi) that has been approved for low sex drive (Hypoactive sexual desire disorder or HSDD), but it has significant side effects. Addyi can cause severely low blood pressure (hypotension) and loss of consciousness (syncope). These risks are increased and more severe when patients drink alcohol, so physicians must counsel patients on the risk of alcohol intake when using this medication.

Serum levels of testosterone do not correlate with women's sexual function according to large epidemiological studies. Whether a relative lack of testosterone activity underlies women's sexual dysfunction is unknown. The long-term safety of systemic testosterone with or without estrogen is unknown. Since women's sexual lives tend to endure as long as there is an active partner (Basson), improvement in sexual function and well-being is important for long term health. Making sense of studies of hormone therapy is difficult, since study populations differ and a wide range of sexual questionnaires have been used. (Lebbe). Testosterone replacement as well as administration of DHEAS (which is a precursor of estrogen and testosterone, but doesn’t raise blood levels of either) have both been shown to improve libido and sexual functioning. Neither is FDA approved for women, but compounding pharmacies can provide “bio-identical” creams for topical or intravaginal use.

Other problems that may cause symptoms of menopause

The symptoms of either hyperthyroidism or hypothyroidism, such as skin dryness, hot flashes, mood swings, depression, and weight gain, can mimic the symptoms of menopause. If patients on hormone replacement therapy continue to experience mood swings, depression, or sleep disturbances, patients are advised to have a thyroid function test. The AACE (American Academy of Clinical Endocrinology) recommends that all women older than age 40 have a TSH test, because studies have shown that 10% of these women have undiagnosed thyroid disease.