At REIG, we have years of experience helping patients with recurrent pregnancy loss have healthy pregnancies. We excel at diagnosing, counseling, and treating simple and complex RPL conditions. We are willing to consider less commonly accepted causes of RPL, such as allo-immune causes (where the normal mechanisms that prevent a woman from rejecting her fetus don’t work). The field of Reproductive Immunology is expanding, and has brought hope to many women. 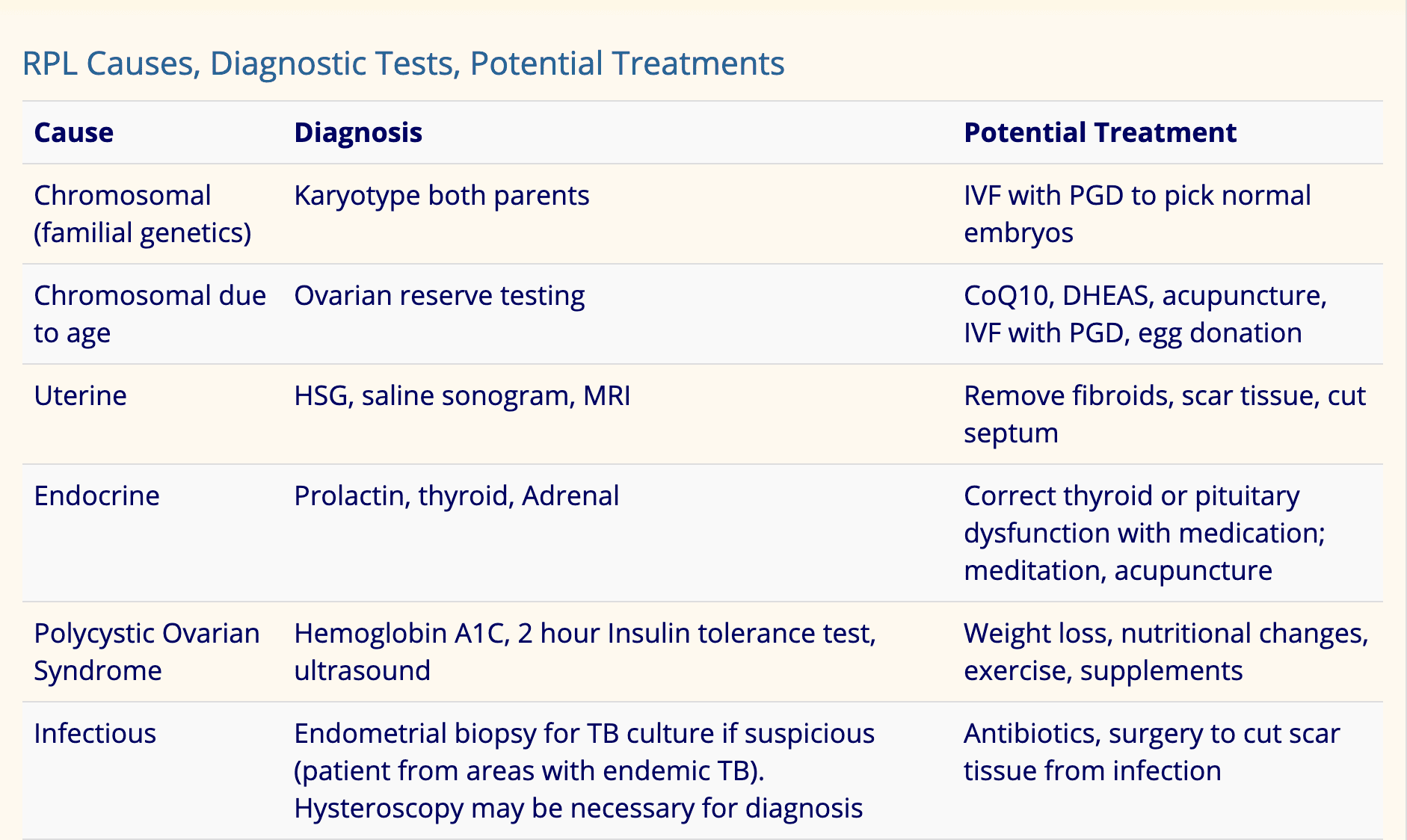 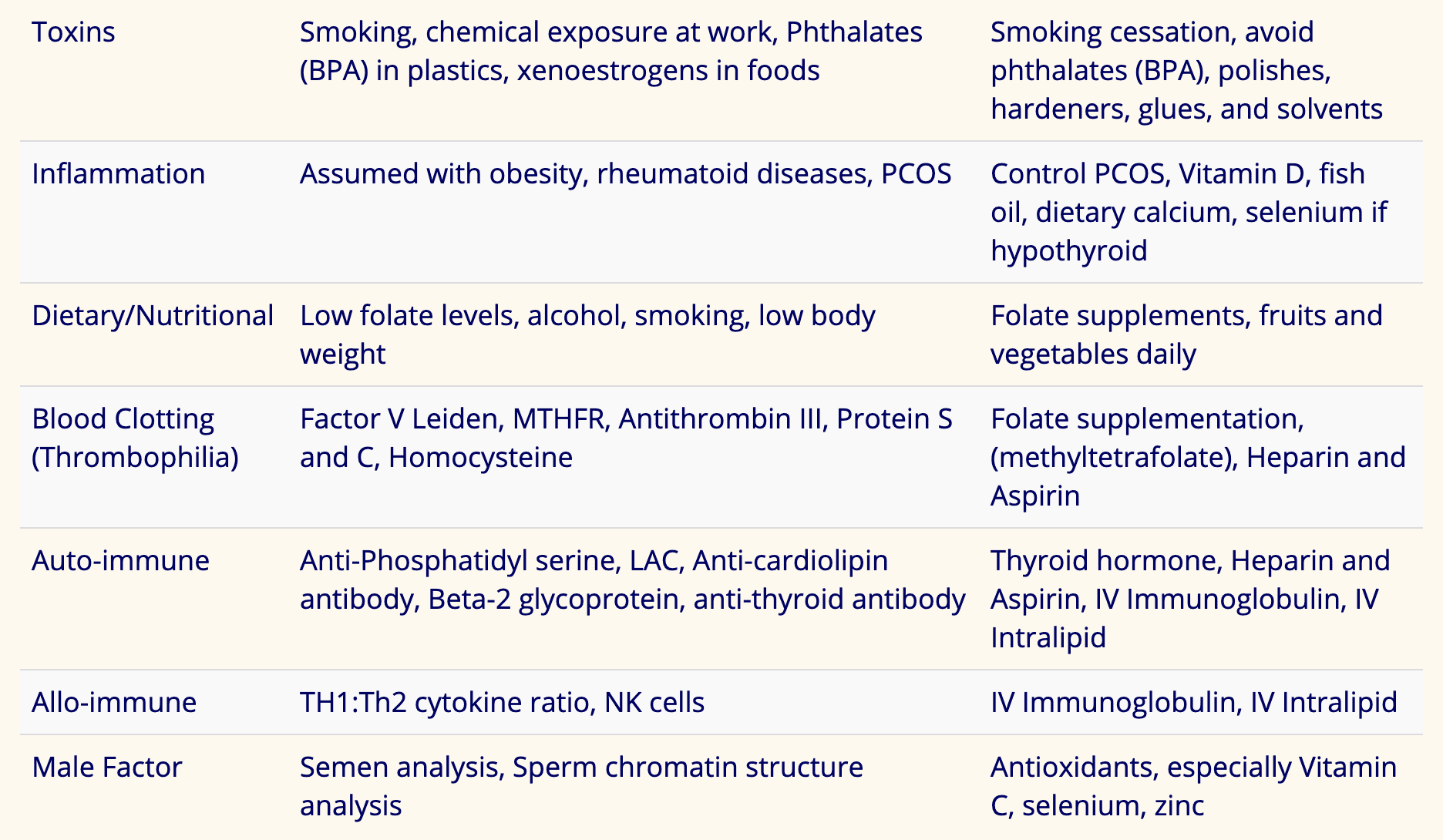 The incidence of chromosomal abnormality in couples experiencing RPL is 3-5%. Diagnosis is made by chromosome testing (karyotype) of a patient’s blood sample. Most RPL patients with a chromosome abnormality have no physical evidence of a problem other than their history of RPL itself. Couples with a family history of genetic abnormality or miscarriage should be offered genetic counseling as well as genetic testing. (2)

Types of chromosomal mistakes that cause RPL

It is estimated that 10-20% of RPL results from anatomic abnormalities of the uterine cavity. Abnormalities are diagnosed with an X-ray procedure (hysterosalpingogram - HSG) or an ultrasound procedure (sonohysterogram – SHG) or Hysteroscopy (looking inside the uterus).

One uterine abnormality is a septate uterus. If implantation occurs on or near the septum, then blood flow is poor and there is a higher risk of miscarriage. A septum can be excised with hysteroscopy and yields excellent results, although there is a risk of scar tissue forming. 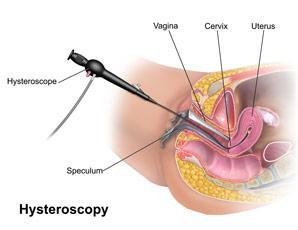 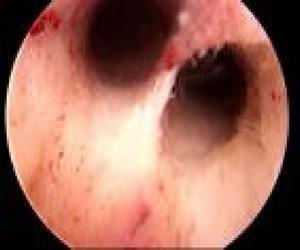 Figure 5 - Uterine Septum Prior to Resection

Fibroids are benign growths that are very common and often are asymptomatic. If fibroids grow inside or close to the uterine cavity, there is a higher risk of abnormal bleeding and miscarriage. If there are multiple fibroids in the uterine wall, then blood flow to the uterine cavity may be affected, and this can lead to increased risk of miscarriage. Removal is usually successful, although scar tissue can form, depending on position and size of tumors. 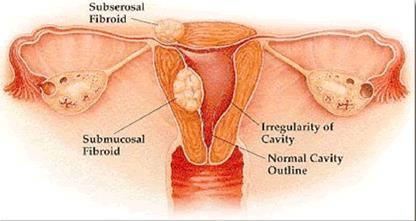 Asherman’s Syndrome involves scar tissue inside the uterus. This can be caused by bacterial infection, surgery on the uterus for miscarriage or pregnancy termination (D&C), prior surgery to remove polyps or fibroids, or Tuberculosis. Treatment involves Hysteroscopy to look inside and remove scar tissue from the uterine cavity. This surgery is usually corrective, but rarely a gestational carrier may be required.

The incidence of endocrine abnormalities in women with RPL is approximately 10-15% and may be much higher if patients with PCOS are included. Endocrine factors may include hyperprolactinemia (pituitary prolactin overproduction), thyroid dysfunction, and Diabetes. Correction of these problems are critical prior to attempting conception to reduce fetal harm, improve fertility and reduce risk of miscarriage.

Defined as female age of 35 and above. Many women assume that reproductive success will naturally follow a healthy lifestyle. Unfortunately, living a healthy life does not change the fact that a woman is born with all of her eggs. A good number of women with unexplained infertility or RPL are experiencing accelerated reproductive aging. Aging eggs are more likely to be genetically abnormal. Thus, advancing female age (and increasing male age) will cause an increased number of genetically abnormal embryos.

Diagnosis is based on estradiol and FSH (follicle stimulating hormone) plus antral follicle count that are checked early in the menstrual cycle. AMH (anti-mullerian hormone), which reflects the number of healthy eggs growing for that menstrual cycle can be tested throughout the cycle. These tests can help identify even young women with diminished ovarian reserve who need aggressive fertility therapy, as well as identifying a reason for miscarriage. Ovulation induction with fertility drugs may increase the number of eggs that ovulate each month, thereby increasing the chance of a normal egg developing.

This disorder of androgen excess, anovulation, and altered insulin metabolism, “insulin resistance” is associated with up to a 50% miscarriage rate in patients older than 35 years. Older patients may have a higher rate when the effects of PCOS and age are combined. Typical diagnostic tests include testosterone and DHEAS levels, 2 hour insulin/glucose tolerance test, FSH and LH levels, and ovarian ultrasound evaluation. Abnormalities, such as thyroid disease or hyperprolactinemia, should also be excluded. Patients with significant insulin resistance and high testosterone levels may be at greatest risk of miscarriage, as are obese patients.

Treatment consists primarily in treating insulin resistance with dietary and lifestyle changes to reduce weight. Folate absorption is reduced in obese patients along with other metabolic problems that increase risks of fetal harm and complicated pregnancy. Metformin has been shown to reduce the risk of miscarriage, and is prescribed throughout the first trimester of pregnancy. Nutritional supplements (chromium, cinnamon, ginseng, alpha-lipoic acid), dietary changes (low glycemic diet) and behavior modification (increased exercise and mind-body medicine for stress relief such as biofeedback, yoga, meditation, music therapy) with allow many women to overcome PCOS and conceive a child naturally, while reducing the risk of miscarriage.

Autoimmune: antibodies are directed against one’s own organs. This includes illnesses such as Systemic Lupus Erythematosus, Rheumatoid Arthritis, and thyroid dysfunction. The antiphospholipid antibody syndrome (APS) is defined by recurrent pregnancy loss and thrombosis (blood clots) in the presence of antiphospholipid (aPL) antibodies. Phospholipids are an integral part of cell wall development and help blood vessels form in the placenta. aPL antibodies attach to the phospholipids and affect blood vessel development. Treatment consists of blood thinners, Heparin and aspirin.

Alloimmune: A normal pregnancy consists of the growth of fetal tissue that has foreign antigens from the father. The mother’s immune system generally produces blocking antibodies to keep her immune system from attacking the foreign cells of the fetus. Immune cells secrete messengers called Cytokinesthat can either turn on attacking cells, or turn on anti- inflammatory cells. These cells may cause maternal harm (allergies), but in general they help to protect the pregnancy.There are two main types of immune cells involved in maternal tolerance of pregnancy: attacking cells are called T-helper cells 1 (TH-1) and anti-inflammatory cells are called T-helper cells 2 (TH-2). The ratio of these cells appears to represent the activity of the maternal immune response to pregnancy (TH-1:TH-2). Studies have shown that women with recurrent miscarriage exhibit primarily TH-1 cytokines, whereas healthy women exhibit decreased TH-1 cytokines and increased TH-2 cytokines. (6) Treatment is controversial, and consists of immunosuppression.

LPD is a controversial cause of RPL. This can be a disorder of either low progesterone production by the ovary or low uterine response to progesterone. Endometrial biopsy and serum progesterone testing have been shown to provide highly inconsistent results in numerous studies. Treatment primarily consists of inducing ovulation to produce improved egg production, which, in turn, may correct a luteal phase defect. Patients have been administered progesterone supplementation in addition to ovulation induction in an effort to improve success rates. A recent study of progesterone therapy in the first trimester of pregnancy did not result in a significantly higher rate of live births among women with a history of unexplained recurrent miscarriages. (7)

Suboptimal progesterone production and uterine pathology may result in endometrial defects. In some cases, endometrial defect may occur despite normal progesterone levels and in the absence of obvious uterine pathology, in which case it is unexplained. Newer genetic markers of estrogen and progesterone effect in the uterus may provide more accurate diagnostic testing. Cell adhesion markers have been identified, and shown to be involved in attachment of the blastocyst to the endometrium. (8) Endometrial Function Testing (EFT) is a specialized biopsy that can show whether the endometrium is normally producing the “sticky glue” necessary for normal implantation and embryo and placental development. (9)


Toxins such as ionizing radiation, mercury, lead and alcohol are confirmed teratogens, and could contribute to pregnancy loss. Hyperthermia (fever or high body temperature during early pregnancy) is a suspected teratogen. Cigarette smoking has been linked to miscarriage, ovarian damage, and diminished ovarian reserve and earlier than expected menopause. The teratogenic effect of pesticides and herbicides is unknown, but of concern. It is unknown whether exposure to food additives, such as artificial sweeteners, contribute to recurrent pregnancy loss. It is advisable to eliminate toxins at least three months prior to conception. 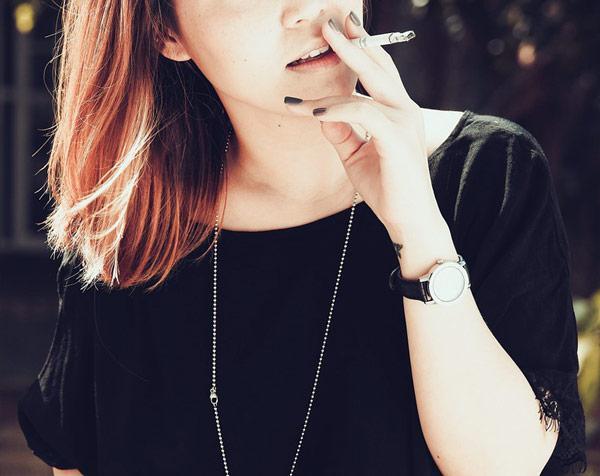 Recent reports of reproductive damage from phthalates (BPA, etc) are suspicious for increased miscarriage risk and should be avoided as much as possible. A study of women working in salons with high exposure to hair dye, solvents and nail polish showed an increased risk of gestational diabetes, and evidence of SGA infants (small for gestational age), as well as premature ruptured membranes and placenta previa. (5)

Approximately 50% of couples experiencing RPL have no cause identified after routine testing. Many of these patients may be experiencing recurring embryonic genetic abnormalities incompatible with survival (aneuploidy). The risk of chromosome abnormalities (aneuploidy) in embryos increases primarily with female age, and to a lower extent, with increasing male age. However, with the increasing use of IVF/PGD, studies have shown very high rates of embryonic aneuploidy in previously unexplained RPL patients starting as young as their mid to late 20’s. Thus, recurring embryonic aneuploidy appears to be a common cause of RPL in patients where no other cause has been identified regardless of age. (2)

Hypercoagulable conditions that are either inherited or acquired may cause RPL and pregnancy complications. Testing is generally performed if there is a significant family or personal history of thrombosis or early cerebrovascular events (stroke). Prior unexplained fetal death (loss of heartbeat after 8 weeks), severe fetal growth restriction with no other identifiable cause, and early toxemia (preeclampsia) during pregnancy are indications for testing. Diagnosis is based on blood testing for Factor V Leiden mutation, Prothrombin gene mutation, Protein C and S deficiency, and hyper-homocysteinemia (MTHFR mutation). Treatment generally consists of heparin and aspirin. If elevated homocysteine or MTHFR mutation is present, then supplementation with folate and vitamins B6 and B12 is indicated.

Males with significant, persistent abnormal sperm morphology (abnormal shape) may father a higher number of genetically abnormal embryos. Diagnosis requires several semen analyses. Sperm testing with DNA fragmentation analysis may also predict the presence of a higher than average percentage of genetically abnormal sperm. It is possible that some cases of RPL may be related to increasing male age – particularly in men over 40 years old. 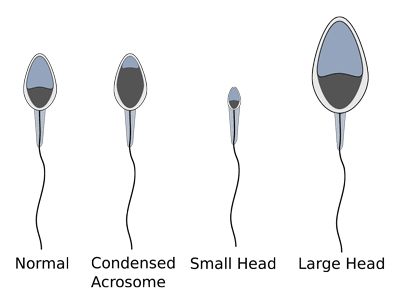 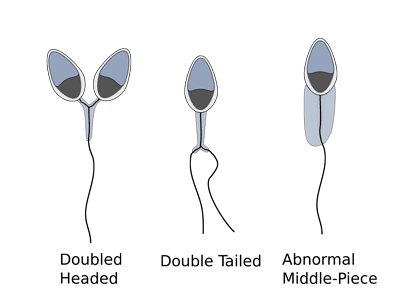 Maternal infections, such as rubella, cytomegalovirus, toxoplasmosis or herpes can have devastating effects on a fetus, causing severe birth defects or miscarriage, but they do not cause recurrent pregnancy loss. Mycoplasma has been suspected of causing RPL, although recent studies have refuted this. Bacterial vaginosis (BV), is a complex alteration in vaginal flora involving multiple bacteria, including Mycoplasma and Gardnerella vaginalis. These changes are accompanied by a depletion in vaginal lactobacilli. Infection with BV has been associated with increased risk of first trimester miscarriage in patients undergoing IVF. Probiotics are being studied as a method to maintain female vaginal and bladder health and as a treatment option for recurrent bacterial vaginosis, urinary tract infection, yeast vaginitis, and sexually transmitted infections. Probiotics have been widely used by patients to treat bladder and vaginal infections, but research has not yet shown a benefit in reducing miscarriage risk. (12)

Tuberculosis can cause pelvic infection, leading to infertility and miscarriage. Patients can be otherwise asymptomatic. Diagnosis requires endometrial biopsy to obtain tissue, and the organism may take over a month to grow in culture. Treatment with anti-tuberculosis drugs will often be curative, but scarring may occur, requiring surgery to correct. Scarring is sometimes severe enough that pregnancy is not possible, and a gestational surrogate may be necessary.

There was a strong trend in increasing odds of miscarriage with increasing number of stressful or traumatic events. The most common event was having a stressful or demanding job. (1)

The tragedy of miscarriage has traditionally been private, an event grieved largely by the mother, on her own. Health-care professionals often advise these women that the sadness would grow less pronounced over time, especially following a successful pregnancy.

One study found that patients' experiences of pregnancy loss were embedded within their experiences of infertility and medical treatment, and shaped by their significant investment in having a child. A significant feature was their marked ambivalence regarding future reproductive options after their pregnancy loss, reflecting a unique overlay of prominent anxiety in their grief experience. (13)